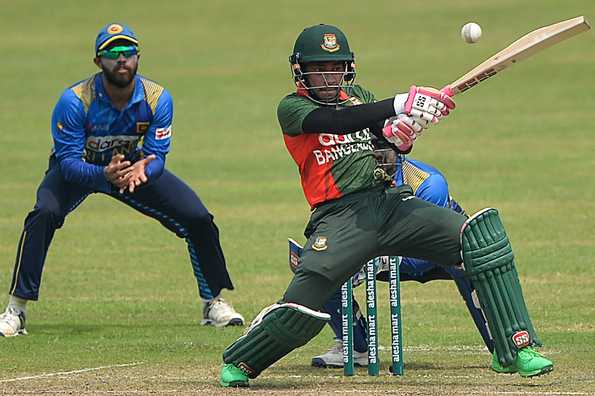 ALL OVER!Bangladesh register their first-ever bilateral series win against Sri Lanka in ODIs. They have done it in their 9th attempt. The rain interruption only delayed the inevitable as the hosts recorded a 103-run win via DLS method. What’s more? Bangladesh are now at the top of World Cup Super League table. Must be really disappointing for the Sri Lankan fans given the approach of some of the batters chasing not-so-tough totals. One final game left now. Can Sri Lanka make a comeback? Do join us on Friday to find out. Please track the post-match comments here. Cheers!!

There’s no stoppage to wickets. Bandara and Sandakan depart in quick succession. With just one wicket to get, it started to rain heavily and the players are off. Just the inevitable left one would imagine…

That should be the game?Hasaranga gets dropped on 4 and perishes next ball. Uses his feet, trying to hit a maximum, and completely misreads the off-break from Mehidy. Cleaned up. Bangladesh three wickets away from winning the series…

Shanaka gone too! Sri Lanka finding ways to sink further. The all-rounder looks to slog Mehidy and top-edges it to mid-wicket. The much-awaited Hasaranga walks in next…

Sri Lanka’s top five back in the hut: Shakib hurls a slider and traps DDS plumb in front. No signs of Hasaranga yet. It’s Dasun Shanka as the required rate crops up to 6.50…

Another failure for Pathum Nissanka: Looks to punish a short ball and miscues it to mid-wicket. A juggling take from the Bangladesh skipper. The required rate creeping up towards 6…

The FIZZ strikes: Gunathilaka looked pretty solid, but he flattered only to deceive. Chases a short, wide ball and picks out the only fielder in the deep on the off-side.

The skipper is gone: Kusal Perera looks to be ultra-aggressive and perishes. Tries to heave the debutant out of the attack and picks out mid-on. Nissanka joins Gunathilaka in the middle…

Here’s an important update from our correspondent, Atif Azam: Bangladesh all-rounder Mohammad Saifuddin was hit on his helmet while batting in the second ODI. He has shown signs of concussion and he is being substituted by a like for like player Taskin Ahmed.”

After losing 4 off their top 5 batters inside 15 overs, Bangladesh have done splendidly well to post a competitive total on board, thanks largely to Mushfiqur Rahim’s 125. The experienced keeper-batsman engineered a vital partnership with Mahmudullah before upping the ante. Sri Lanka, chasing 258, only managed 224 in the first ODI. Can they turn things around today? Join us back in a bit for the reply…

After a 35-minute rain break, we have some positive update. It’s clear for now and no overs have been lost. Mushfiqur notches up his 8th ODI ton, and the hosts look good to post a 250-plus score.

Okay, scratch that. The rain is back. Here’s something you can much on before we resume…

Well, that was brief. The players are back and all eyes will be on Mushfiqur as he moves into the 90s…

On expected lines, the rain has arrived and the players rush off the ground. Entire square has been covered. Mushfiqur is on 85* and he will be hoping to convert it into a three-digit-score as and when the play resumes.

Another mini-collapse?Afif Hossain, who looked very positive, threw it away trying to be too adventurous. Mehidy Hasan, the hero with the ball from the last game, doesn’t trouble the scorers. Bangladesh seven down…

Sandakan gets his third: Mahmudullah tries to be cheeky and ends up slicing the scoop to the left of the keeper. The Sri Lankan skipper reacts sharply to claim a well-judged catch. The 87-run partnership has been broken. Onus on Mushfiqur once again….

Back-to-back fifties for Mushfiqur Rahim.It’s his 41st in ODIs and third successive at home. Yet again, his innings could prove very vital if Bangladesh are to post a challenging total.

FOUR DOWN:Just like the last game, Bangladesh have lost four wickets under 100. Mosaddek, the latest, gets strangled down leg off Sandakan. Can Mushfiqur, Mahmudullah repeat their heroics from the last game?

Lakshan Sandakan gets a wicket first ball. A soft dismissal from Liton Das. Looks to cut a wide delivery and chips a dolly of a catch to backward point. Easy!

After the drama-filled first couple of overs, Liton and Mushfiqur have done well to steady things with occasional boundaries. The powerplay is done, and both teams wouldn’t be too unhappy with the proceedings…

Chameera at it again:The lanky Sri Lankan pacer picked up Liton Das in his first over last game and today, he’s got Tamim and Shakib in the space of 4 balls. Sharp pace and enough movement. Both playing down the wrong line and trapped lbw. What a terrific comeback from Sri Lanka!

N4 4 Wd 4 0 1 0 0–Not the best of starts with the ball for Sri Lanka and Isuru Udana. Sprayed it all over the place before getting his lines right for the second half of the over. Tamim is up and running with a flurry of boundaries….

Team changes:Taskin Ahmed and Mohammad Mithun OUT. Shoriful Islam (debut) and Mosaddek Hossain IN. Sri Lanka are unchanged. Here’s how the teams line up

The toss is imminent, what changes are you expecting? You can follow the game live here

Hello and welcome to the second ODI between Bangladesh and Sri Lanka. The first big, bright news of the day is: the radar, unlike yesterday, shows very slim chance of rain and expect a full game with no (possibly a few) interruptions. After a comfortable 33-run win in the first ODI, Bangladesh will be looking to seal the series but, can Sri Lanka turn things around? Read our preview here.

Bangladesh needs to score 300 and 350 in ODIs: Domingo