South Korea has become the first big Asian economy to raise interest rates since the start of the pandemic, as record household debt and rocketing property prices outweighed fears over Seoul’s struggle to contain the Delta coronavirus variant.

In a closely watched decision on Thursday, the Bank of Korea raised its benchmark rate to 0.75 per cent, increasing the seven-day repurchase rate 25 basis points from a record low of 0.50 per cent.

It marked the country’s first rate rise since September 2018, while interest rates have remained unchanged since the BoK cut them by 50 basis points in May last year.

South Korea is on track for gross domestic product growth of 4 per cent this year. The export-led economy has benefited from robust demand for electronics products including computer chips and smartphones, as well as recovering markets for Korean-made ships and cars.

But economic planners in Seoul have grown increasingly concerned that chronic problems in the domestic economy have been masked by the booming export recovery, which helped rescue the country from the depths of a pandemic-induced recession last year.

“Despite today’s hike, financial conditions remain accommodative,” said Lee Ju-yeol, BoK governor. “We are seeing some side effects from the unusually loose conditions of the past year-and-a-half, so we will normalise interest rates in accordance with the economic recovery.”

Alex Holmes, an economist with Capital Economics, expected the BoK to tighten its monetary policy further to rein in financial risks.

There are also signs that many self-employed workers in Asia’s fourth-largest economy, who make up almost one-third of the labour force, were under mounting financial pressure after coronavirus restrictions sharply reduced their incomes.

Economists have warned that despite record government stimulus measures, which have included cash payments, the recovery in consumer spending remained fragile.

The BoK’s move also sparked debate over whether central banks in Asia might soon follow suit earlier than expected. 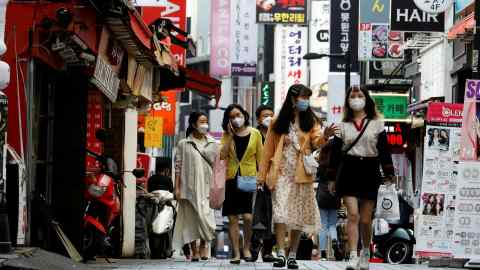 Mitul Kotecha, an emerging markets strategist at TD Securities, said that while further easing in monetary policy in the region was “unlikely”, most Asian central banks were set to “maintain accommodative bias”.

“Perhaps only India is at risk of hiking in the region in the months ahead, though we think this will only take place in [the first quarter] next year. In contrast, we think the [People’s Bank of China] could cut its RRR in the weeks ahead,” he said, referring to the central bank’s reserve requirement ratio, or the amount of cash Chinese banks must hold as reserves.

Ahead of Thursday’s decision in Seoul, economists were broadly split on the BoK’s decision despite the bank’s signals to resume rate increases, according to Bloomberg and Reuters polls.

The unusual level of uncertainty stemmed from a months-long resurgence of coronavirus cases, which has forced South Korea into its toughest social-distancing controls since the start of the pandemic.

South Korea’s currency weakened 0.27 per cent to Won1,170 against the dollar following the central bank’s announcement.

How is coronavirus taking its toll on markets, business, and our everyday lives and workplaces? Stay briefed with our coronavirus newsletter. Sign up here